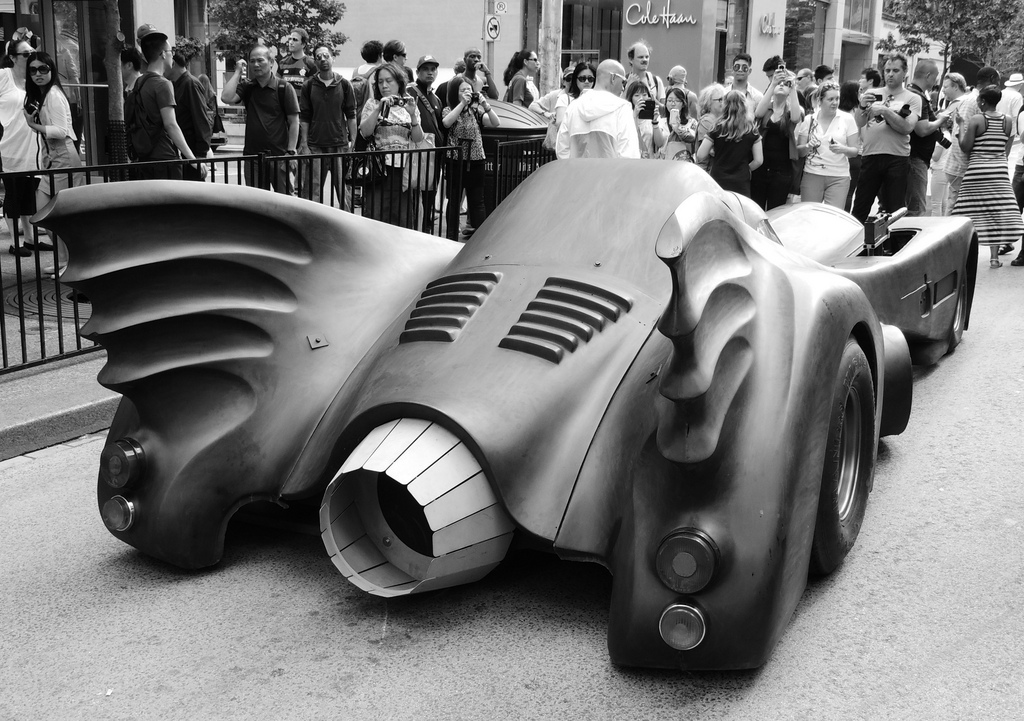 Paul Leroux interviews Tim Neil, a director of product management at RIM, who is building his very own Batmobile™. This project might sound like fun (and Tim assures us it is), but it also demands a wealth of skills, from welding to HTML5 programming.

Tim, could you give us a quick overview of the BatBerry project?

The BatBerry combines my love of cars, Batman, and technology. I’ve always wanted to build this car and I’ve had a couple of unsuccessful attempts at creating a carputer. When RIM started creating a 7″ tablet, I knew the time was right to bring all of these interests together.

How did you get started on this project?

I started my research about 15 years ago, trying to determine how and where to get started. For instance, I needed to track down the shifter, which is a throttle quadrant from a WWII US Navy bomber.

By 2010, I had finished modifying my custom Subaru WRX, and I needed to get started on something new — working on cars is my way of escaping and relaxing. The time was right, and I got the green light from my wife. Luckily for me, she knew of my desire to build this car when we met and it didn’t scare her away. 🙂

Reading your blog, I’m totally impressed by the scope of the BatBerry project — be it creating dashboard panels, writing control software, or building a retractable license plate. Do you do most of the work yourself?

Yes, I try to do as much of the work myself as possible. I leave important things that I don’t have experience in, like doing the frame stretch, to the professionals. I did the same thing building up my Subaru over the past 7 years: learning how to do body work, interior, stereo, engine modifications, etc. I like to learn things as I go and I’ve always had a knack for figuring out how things work. I always figure, what’s the worst thing that can happen? If screw up, I just have to try again.

To pull this off, you need to be a jack of all trades. I’m sure you had skills to begin with — but did you also have to pick up any along the way?

Welding is one of the biggest skills that I’ve picked up so far. I bought myself a welder, watched a couple of YouTube videos, and got to work. I can tell you, my welds look MUCH better now than my first ones. From all the welders I’ve talked to, it’s a skill that simply takes patience and practice.

Since I was a kid I have always been able to figure things out. When I was 8 years old I was wiring my bedroom up to have a switch on my headboard automatically open the door. The best way that I can describe to people how I see the world is by watching the movie Iron Man. When you see Iron Man’s computer JARVIS take an object and expand it out into a million pieces to show how it works, that’s what I see when I look at something.

What kind of power plant does the BatBerry use? Have you modded it?

The car currently has a 305 4.3L L99 V8. I haven’t really modified it yet. I will likely go with a re-built version of the same engine so that I can re-use the ECU. I’m not looking to make this car into a high-performance hot rod — that’s where my Subaru comes in. Plus, it’s nice to drive distances not always looking for a gas station that serves 94 octane. 🙂

The V8 puts out 200hp, which should be pretty good for the BatBerry, considering it is basically a frame with a 400-pound fiberglass body mounted to it. As long as it sounds nasty I’ll be happy. I have a couple of Flowmaster 40 series mufflers for it.

Anyone who reads this blog knows we are bullish on HTML5. So I was fascinated to hear that the BatBerry project has an HTML5 connection. Could you tell us about it?

As the former development manager for BlackBerry WebWorks at RIM, I wanted to show what could be done with HTML5 technology. I wanted to build an interface on my PlayBook and BlackBerry Smartphone that could control some of the systems of the car.

I also wanted to share as much code as possible between the Smartphone and PlayBook, and using WebWorks and HTML5 allows me to do this. These devices pair with a Bluetooth connection on an Arduino board to control a series of relays that raise and lower the 30-cal machine guns, open and close the canopy, raise and lower the suspension, and perform other functions.

All the source code for the project, including Arduino microcontroller code, is being shared in my BatBerry repo on github.

What has been your greatest challenge? And what are you most proud of, so far?

My biggest challenge has been finding time! I’ve been travelling for work more on weekends and while this winter was pretty mild, it was still a bit hard to head out into a freezing cold garage to put in a couple hours of work during the evenings.

I would say the two things I’m most proud of so far are my welding skills and my dash panels. I really wanted to give back something to others who have been building their own versions of this car. Screen-accurate dash panels were something missing from the community. In general, I really like to share what I’m doing so that others who want to do something similar can see what worked, and what didn’t work, for me.

The Discovery Channel has been tracking the BatBerry project. Do they plan to broadcast anything soon?

Nothing to air at the moment. The next step will be to get updated footage of some of the technology integration points. I’m getting close to being able to show the combination of HTM5, Arduino, and the machine guns to get some new footage. Once we reveal the car, filming will wrap up and go into post-production for airing sometime in the future on Daily Planet.

When you aren’t working on the BatBerry, what do you do?

I spend my spare time hanging out with my family, doing something with cars, or playing with technology. My daughter is a big Star Wars fan so she and I have been having some epic lightsaber battles lately. I’ve done a lot of car shows in the past with my Subaru and I really like meeting up and trading experiences with the car community around Toronto. At RIM, I direct the product management group responsible for developer tools, APIs, and SDKs — our focus is on removing barriers and adding features to make developers successful.

One more question: Which Batman character do you most identify with?

I would say Batman himself. While I’m not on the tipping point of insanity and looking to be a vigilante, I identify with the desire to make a difference. I also relate to the do-it-yourself attitude and the love of cool tech and cars. Plus, I’m just a geek at heart. 🙂

View the Original Article as Posted on the QNX Auto Blog