As part of my investigation into the digital console I can’t allow myself to just stay within the bounds of software.  I also need to explore and prototype what fabrication is involved in order to retrofit this type of technology into a vehicle.  That means doing one of my favorite things… tearing things apart and building them back up again 🙂

The target vehicle to prove out this concept is none other than the good old shop truck which is a 2004 Jeep Liberty Limited.  The interior panels, stereo and climate controls were kept the same in the Jeep Liberty from the years 2002-2007.  They then came out with a slightly different center dashboard design which stretches model years 2008-2013.

There actually are a few reasons on why I’m choosing this vehicle to be used as a proof of concept.  You can probably guess the first reason… I have one sitting in my driveway!  But there’s more to it.  This vehicle has a balance between fairly simple electronic needs and fairly complex fabrication needs.

On the electronics side there aren’t complex circuits like steering wheel controls for media, satellite radio or thermostats for single or dual zone climate control.  Just a good old factory radio and fairly dated climate controls.

Climate controls are mostly electronic.  I say mostly because there are some climate control units that have levers in the back which run from the controls to both the heater box and air routing louvres.  So when you are turning the knobs they are actually moving levers controlling different systems.  But that’s not the case with the Jeep’s climate control. 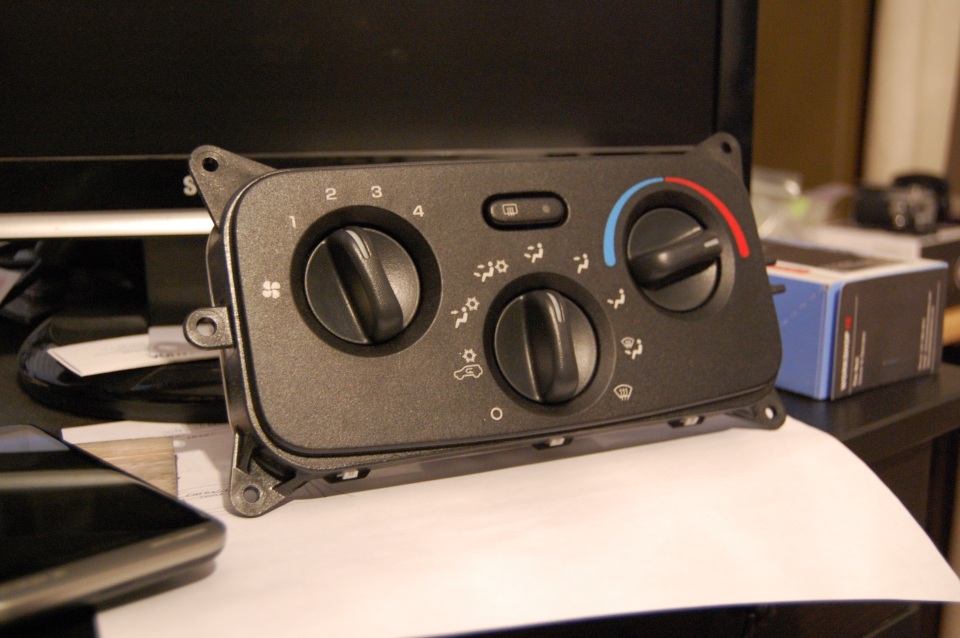 Both the fan settings and the hot/cold settings are either switches or a set of resistors that work as part of a circuit.   The rear defrost is just a simple on/off temporary switch as well.  The fan settings essentially act as a 4 way switch for a control board on the blower of the heater box.  The hot/cold dial completes a circuit on the heater box that controls the valves which regulate the amount of glycol for heat or freon for AC running through the system.  It turns out that I actually had a spare one of these climate control units kicking around.  A couple years ago I thought my climate control unit was broken, but it turned out to simply be a fried $10 blower circuit board on the heater box.

From the rear of the unit you can see the pins on the right which are the 4 way switch for fans and the 12 pin connector in the top middle is for the hot/cold dial.  You may be thinking that this sounds like everything is electronic, but there’s a catch.  At the bottom center you can see a circular device which has 6 nozzles and clips on the side.  These correspond to the 6 different variations on the center dial determining where air is recirculated.

Yes that center dial has more than 6 settings, but if you look at them a bit closer you can see that some of them simply are the same air locations but with an additional switch of turning on the AC.  Inside this unit there is a plate that rotates which in turn blocks/opens the desired tube which sends signal to the vent system on where to direct the air.  While this is not a lever, it’s an old school way of creating a circuit using air instead of electricity.  I’ve also been extremely lucky to have Rob Williams agree to pull the unit apart and check it out further.  Rob is a former colleague of mine where we worked together at Blackberry and he’s been a great help providing a lot of electronic expertise for the BatBerry.

So as I said, there may not be a lot of electronics in the climate control, but there is complexity.  I’ve always found physical/mechanical complexity more of a challenge than software/electronics.  Electronics can be managed with simple circuitry but mechanical challenges require some extra ingenuity and problem solving.

One of the other fabrication challenges that I wanted to tackle was dealing with the center vents on the dashboard.  Like most vehicles the center vents are a bit of a challenge when you wish to place a large touch screen covering most of this area.  The Jeep poses a particular challenge considering the vents are large and located fairly low, so I’ll need to find a solution to relocate them.

As you can see from the above diagram there are a lot of pieces that make up the dashboard of the Jeep.  One of the challenges for re-routing the vents on this vehicle is that it’s slightly different than most dashboards.  Most dashboards have the vent ducting behind the dash and then they are covered up with removable trim pieces that hold the vent louvres.  In Chrysler’s infinite wisdom they decided that they would make the center vents part of the actual single piece dashboard plastic shown in 2.

They changed this design in the 2008 model to be like other vehicles, but I wanted to face this challenge on the proof of concept to show that I can deal with the weirdest manufacturer decisions.  My goal is to be able to retrofit a digital center dashboard console without having to cut/splice/grind or modify the dashboard so that it could be put back to stock if necessary.  That means creating new replacement trim pieces where needed. 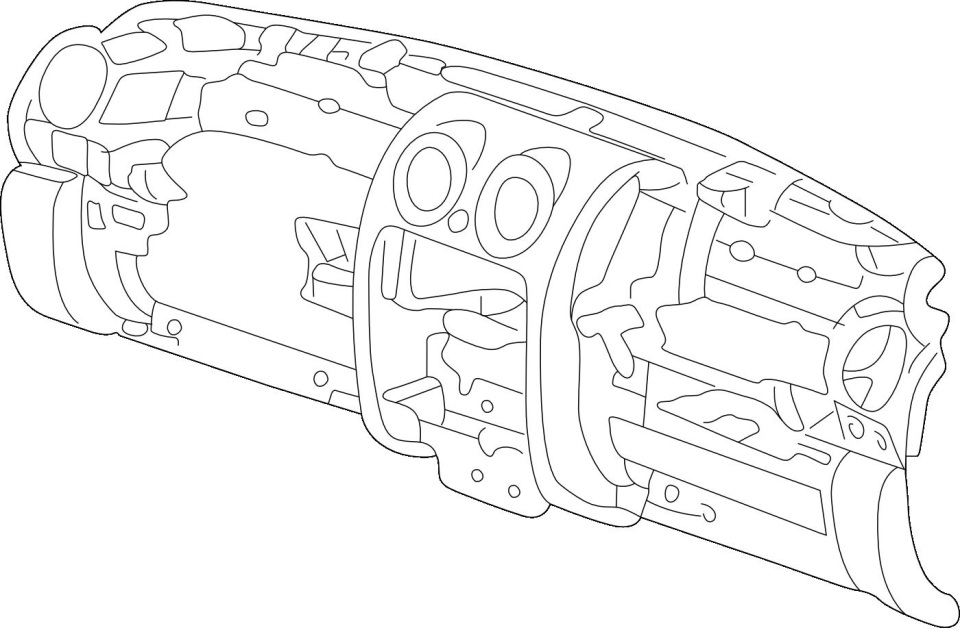 I also don’t want the shop truck to have any down time, so I’ve ordered the big old plastic dashboard seen above so that I can do all of my fabrication and prototype trial and error on the spare dashboard.  I have a feeling it will be a $150 well spent 🙂

I also grabbed a spare bezel trim piece to use as a base for fabricating a new snap in-place trim piece for the touch screen.  It also came with a bonus spare climate control unit which will come in handy if things go awry. Again another $50 well spent.

So the waiting begins for Mr. Postman to deliver the mock-up dashboard and bezel so that I can jump into some early fabrication.  I’m really excited to jump into this project as it has two of my great loves.  Automotive fabrication and software integration!

Stay tuned for more on this journey…